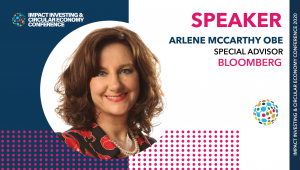 We are thrilled to announce Arlene McCarthy OBE will be speaking at the Impact Investing & Circular Economy Conference.

Arlene was a member of the European Commission High-Level Expert Group on Sustainable Finance (Jan 2017 – Feb 2018). During 20 years as an MEP, she chaired the European Parliament’s Internal Market Committee (2006-2009) and was Vice Chair of the Economic Committee and Monetary Affairs Committee (2009-2014). She was named as one of the top 100 influential women in European finance in 2010, 2011 and 2012 and was awarded MEP of the year in 2014 for her work in financial services. She was also awarded an OBE in the Queen’s 2015 New Year’s Honours List for Parliamentary and Political Services.